Americans once wanted to live to an old age. Now, as people are living longer than ever, they want to age well.

With that shift has come an increasing focus among researchers, health care professionals and commercial brands alike on how to help older Americans age healthily and comfortably in their own homes.

At the forefront of that movement have been high-tech companies with innovations designed to look after older adults and improve their quality of life, with inventions ranging from a smart refrigerator that orders food from the grocery store after sensing there is not enough, to remote monitoring devices and apps that allow people to check in on their older family members.

At the same time America is graying, older generations are using technology in increasing numbers. Forty-two percent of the nearly 50 million adults 65 and over today own smartphones, a sharp jump from the 18 percent who had smartphones in 2013, a survey from Pew Research Center found. And 79 percent of older adults say the lack of internet access is a serious disadvantage.

“Older adults don’t adopt new technologies quite as quickly as younger people,” says Elizabeth Zelinski, a technology and aging expert at the University of Southern California. “But one of the ideas we have with technology adoption is that if people find it useful, and it’s accessible – meaning it’s cheap enough, it’s easy enough, it’s ubiquitous enough – people will adopt it.”

Over the next two decades, overall spending by people 50 and older is expected to increase 58 percent, while spending by Americans 25 to 50 will grow by only 24 percent, according to a 2013 investment report from the AARP. And because baby boomers – Americans born between 1946 and 1964 – spend the most across all categories, particularly health care, “this market is too big to ignore,” the report said.

Within the burgeoning movement to create high-tech products geared toward older Americans, there’s an emphasis on health, social well-being and safety. And the nation’s $3 trillion-per-year health care industry is closely monitoring tech innovations that could prevent falls or other accidents and alleviate health risks, particularly as the number of health care workers has dwindled in recent years.

Falls are the leading cause of injury and death among older Americans, according to the Centers for Disease Control and Prevention, contributing to about 27,000 deaths annually. In 2014 alone, older Americans’ 29 million falls resulted in 7 million injuries and cost about $31 billion in annual Medicare costs.

Fall-detection wearables that can call for help are nothing new – think Life Alert’s“Help, I’ve fallen” pendants that have been around since the late 1980s – but implementing the same technology into sleeker, more attractive devices may entice older Americans who find the pendants stigmatizing and unattractive, says Laurie Orlov, who has been analyzing industry trends since 2009 for her blog, Aging in Place Technology Watch.

Sensosafe, for example, recently released a smartwatch that monitors the wearer’s heart rate, step count and can even call a designated family member if he or she falls. The watch allows family members to monitor an older person’s safety while maintaining their privacy and independence. While only a small share of adults 65 and older owned wearables in 2016, according to an AARP survey, those rates will likely increase as the devices become more commonplace.

“A lot of older people feel that their children are worrying about them too much, and the younger people are saying, ‘Well, I want to make sure Mom’s OK,’ but the difficulty is getting to the right balance between privacy and security,” Zelinski says.

As older Americans increasingly live alone, concerns arise regarding their security and health. About one-third of Americans 65 or older live alone, according to the Institute on Aging. Women are twice as likely as men to live on their own – nearly half live alone by the time they hit 75. Social isolation and loneliness contribute to poor health outcomes, including depression and declining mobility, according to a report published by the National Center for Biotechnology Information.

A Look Into Older Adults’ State of Mind

Branding its product ElliQ as the “active aging companion,” Intuition Robotics hopes to alleviate some of those social and health problems. ElliQ, a tabletop robot that uses artificial intelligence and speaks with a female voice, is designed to simplify communication and other social interactions for older Americans.

Rather than waiting for the user to start the interaction, ElliQ suggests activities to keep older Americans engaged and active. If Grandma has a game of bridge on the calendar, for example, ElliQ will offer to practice with her, or if the weather is nice, ElliQ will suggest going for a walk. Intuition Robotics plans to commercially release the robotic companion in 2018.

“If you look at [Apple’s] Siri or something like that, the goal for us as users is A) for us to initiative the conversation, and B) for it to be completed as quickly and efficiently as possible,” Intuition Robotics CEO Dor Skuler says. “ElliQ has much more of a persona attributed to her, whether it’s her ability to show body language to communicate … or her ability to personalize her approach to different people based on what she learns about them.”

Skuler says ElliQ’s use of emotional intelligence and body language make the device feel more natural for older Americans who may be tech-averse. ElliQ’s proactiveness is what makes the device an asset for older users, Skuler says, because older people often fall into routines of passivity and inactivity. Research suggests that remaining physically active and social can help older Americans fend off health issues such as Alzheimer’s disease and high blood pressure, and can even increase longevity.

But Orlov says ElliQ and other tabletop robotic assistants designed specifically for the elderly may be missing the mark. Older people just need popular devices to allow for more personalization and easier-to-use interfaces, such as the “easy mode” on Samsung Galaxy phones that enlarges icons and simplifies the home screen, she says.

“Having standardized hardware and configurable software is what would make these devices simpler to use. There doesn’t need to be an entirely separate product,” Orlov says, citing controls that parents of young children can enable on their smartphones.

“Alexa,” the digital assistant built into the Amazon Echo, is an example of how a universal device can be tailored to meet the needs of its user. Older Americans can ask Alexa to remind them to take their medicine and adjust lights and temperature, for example, and their adult children can use the accompanying app to check in. The newest version of the device, the Echo Show, also includes a screen, allowing people to check their home security cameras and make video calls.

Orlov says that for older Americans to adopt new tech devices en masse, they must be affordable and unobtrusive, so another major draw for existing digital assistants is the price: The Amazon Echo starts at around $180, while the Google Home is even cheaper. There is no set price for ElliQ yet, but Skuler says his team is “targeting the product to be as affordable as other sophisticated consumer electronics products.”

American workers’ top retirement fear is outliving their money – not declining health or loneliness – according to a 2015 survey by the Transamerica Center for Retirement Studies, which may make older Americans wary of new products with high price tags. Still, Americans may find that the higher price tags of some tech devices are worth the splurge if they seem to make Grandma’s life easier – and their own by default.

“I think there’s a lot out there that can be very helpful,” Zelinski says. “And the older people who are most responsive to that have money.”

Editor’s Note: Growing old in America today looks far different than it did 10 years ago. Older people are working throughout their golden years, are living longer, and many are choosing to age in place. As baby boomers hit the 65 and older mark, the share of seniors in the U.S. is rising drastically. This series explores what it’s like to age in 21st century America, and the issues officials must address to keep up with the nation’s changing demographics and culture. U.S. News determined which states are best serving their growing senior populations in a new Best States for Aging ranking.

Corrected on Oct. 11, 2017: This article has been updated to correct the spelling of Intuition Robotics CEO Dor Skuler’s name. 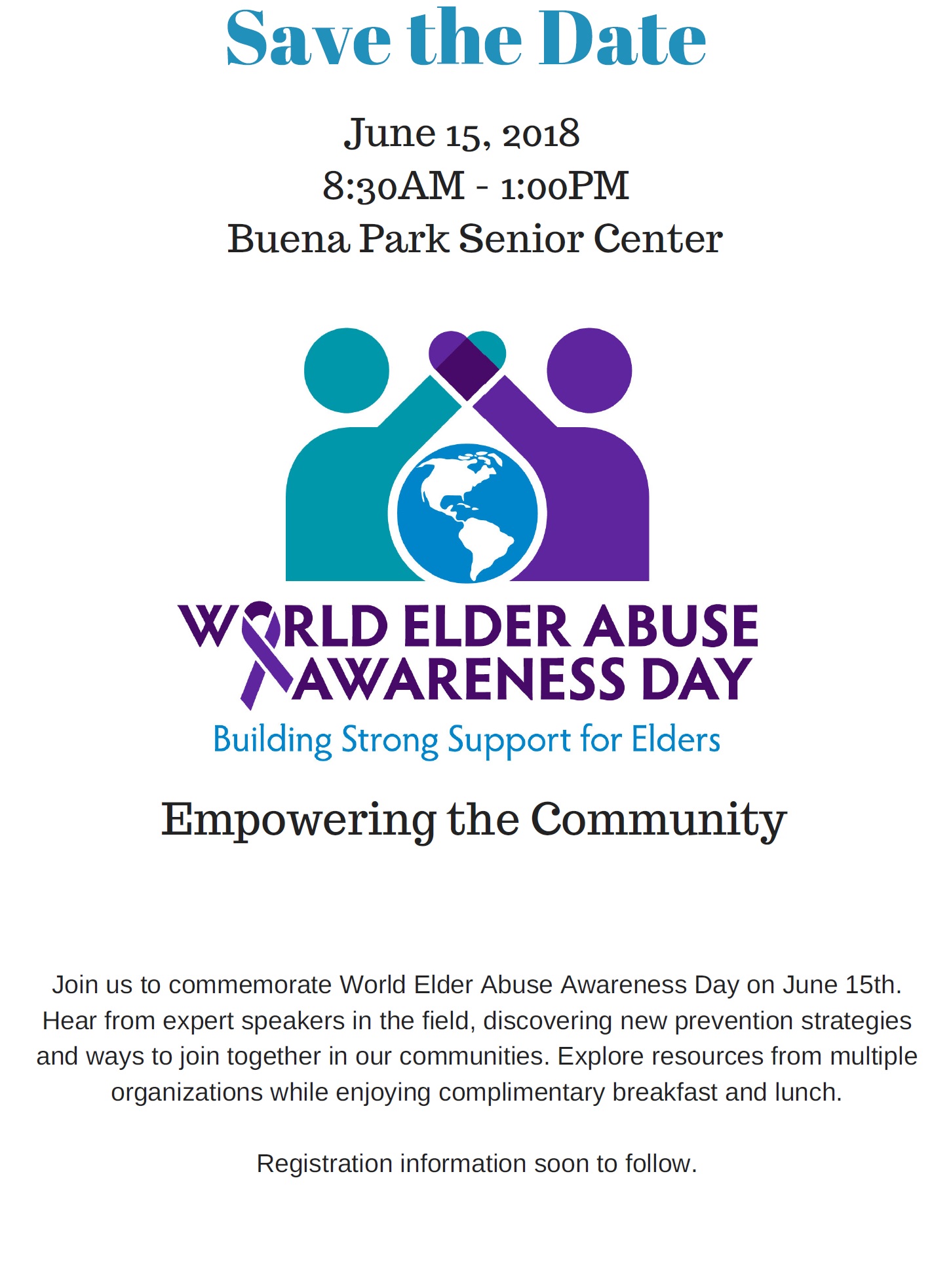 Dear Friends and Members of NOCSC:

You are cordially invited to a special screening of the Netflix film, “Extremis” at the next Educational Forum for Professionals, moderated by Patty Mouton, Alzheimer’s OC, as we recognize and promote National Health Care Decisions Week and the importance of having an Advance Health Care Directive or POLST in place for each of us, and certainly for the seniors that we work with.  Learn about the dilemma’s that an actual ER Physician encounters on a daily basis when her patient’s either do or do not have their wishes in writing.  Seating will be limited, so please RSVP!

We meet from 8:30 – 10 a.m. at the St. Jude Community Services Bldg., 130 W. Bastanchury Rd., Fullerton.  Feel free to park in the Parking Structure next door, parking is validated!  See you then ~ have a good weekend